Thank You everyone with your help we have decided to leave things as they are. You all are GREAT!!!!!
Posted by tasha at 5:05 PM 1 comment:

Hello everyone,
I have a question about the center surround sound speaker.  our center speaker is sitting on the fireplace mantel while the others are placed in the ceiling I have been troubled about this for the last couple of months since it seems as if everyone else has theirs placed in the ceiling centered over the fireplace.  So today my husband called the electrician explained to him my concern he stated that normally the center speaker is placed on the mantel for a better sound  and,  that they would place it in the ceiling if we would like, but he suggested that we go to our local stereo system shop and ask the same questions about where the center speaker should be for the best sound first  .  So my question is for anyone who has the ceiling surround sound installed with the center speaker in the ceiling,   How does it sound ?    And  Do you think the sound coming straight at you when looking at the TV would make a difference.   Thanks guys for your responses I have to make a decision and call the electrician back.
Posted by tasha at 3:04 PM 5 comments:

Hello everyone, I know it has been a while since I posted anything but, I have been reading your post as much as possible. first I would like to congratulate Noey,Becky,mom of twins, meagan,  and CR on their closings . I probably should not have began to name people because I know I will not get everyone but forgive me I have been out of the blogging loop for a while :)   BD it wont be long now.  Becky I love the colors. I would have never attempted the stripes it looks awesome.  Thrifty Amy thanks for the tip  on the pier one coupon did not get to use it though was being lazy :).
Well there has not been much going on with the house I will post some pictures later.  lawn was finally graded and Hydroseeded not growing in as well as I would like it  in certain areas,  we have lots of crabgrass. we have hired someone to treat the lawn and he says to leave them it is too late in the season to treat them and treating it will only damage the seed that is down.   completed painting the powder room, kitchen, upstairs hallway and the guest bedroom. (will post pics).  had to call plumber, hubby was not to happy with the water pressure while using water hoses to water lawn,   plumber adjusted it and said it has something to do with the energy star rating.  still not as strong as we would like it but it will do .   well that's all I got  for now will try and post more often maybe then I will not have so much to say   SORRY!!!!!!
Posted by tasha at 1:50 PM 5 comments:

I just wanted to say hello to everyone it has been a while since I posted anything, but I have been reading your post almost daily. Congrats to all on your settlements. There has not been much going on with us and the house lately we finally got our driveway poured, I am not happy with it, I was expecting it to be wider. it does not hold two vehicles side by side comfortable with enough space to exit the vehicles. also we have had some rain and it seems as there is puddles forming at the bottom of the driveway already I have called the co. and left messages, no one has returned my calls yet but I do not think we should have puddles forming on a newly poured driveway.  Lawn still has not been graded company came by to take measurements but nothing done yet . As for the house Lots of nail pops,still sqeaking in several areas of hardwood, also stairs has started to squeak will be talking to PM about this other than this everything is great we Love our new home,  have not done any more decorating yet.

Well Congrats again to everyone will try and post again soon
Posted by tasha at 12:01 PM 4 comments:

We got our tv mounted over the fireplace also I took a couple of shots to give you and idea of how it would look if you had the wiring ran to the lower left side of the fireplace. the picture  show  the three outlets, the little media center  and a subwoofer for the in ceiling surround sound .  Ignore the blue painters tape LOL!!! 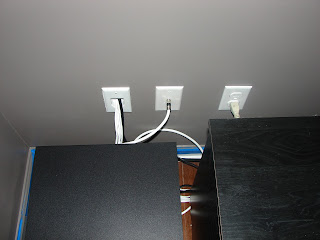 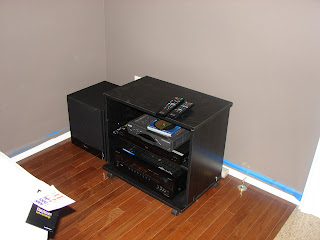 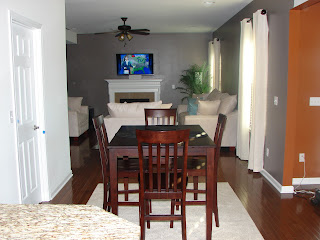 I hope this will help you get a idea of what it will look like
Posted by tasha at 6:08 AM 5 comments: